Diary of Day 4 of Clockwork Calamity in Mushroom World.

First, we hit the hidden mushroom zone over the rainbow we found yesterday. 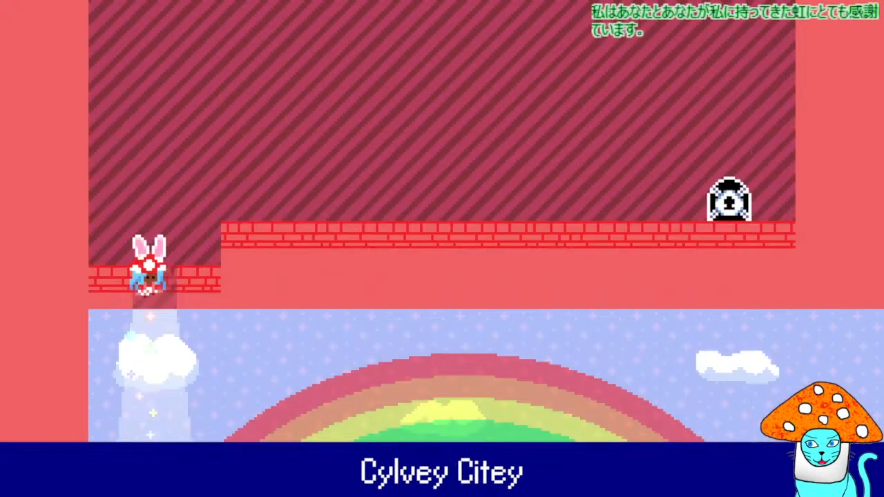 Inside was apparently a special mushroom zone, with all sorts of rare mushrooms.

The only rare mushrooms I had found so far were golden and spring, but here I was able to find some float shrooms in addition to those. 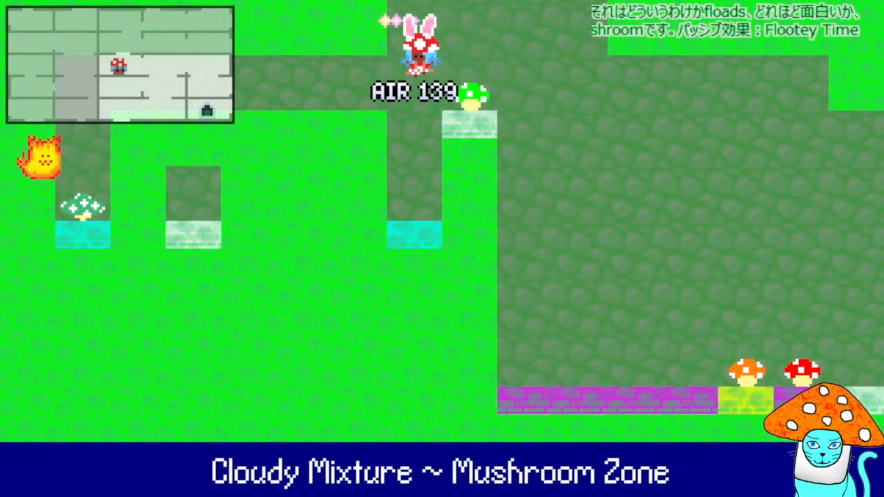 I remembered that there was a person in the Cherry Blossom Hill area who was looking for one of these, and when I visited him, he offered to exchange his jetpack for two float shrooms.

I tried it out and found that it was an amazing thing that allowed me to keep flying indefinitely without consuming any particular fuel. 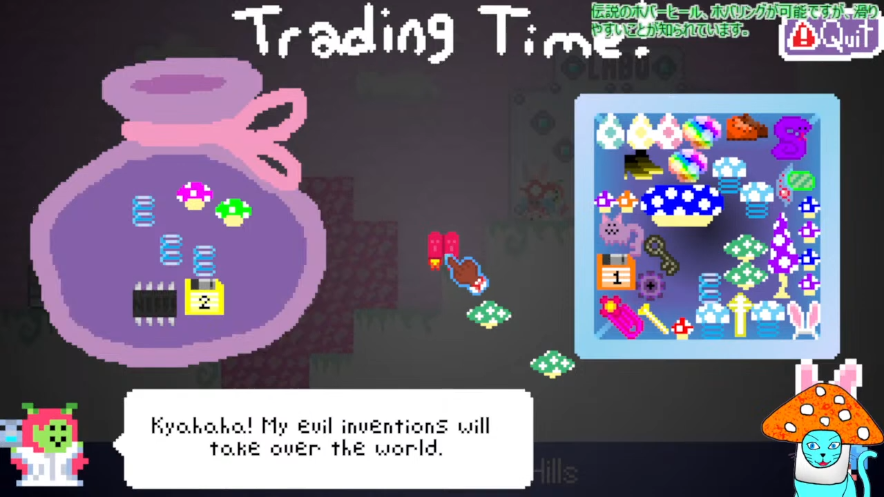 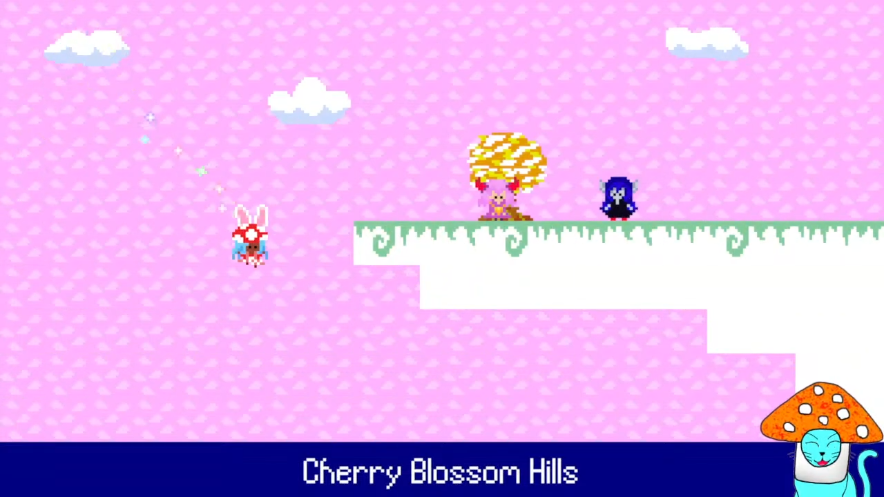 The description just said it was a jetpack that consumed air to fly, so this was the most eco-friendly, most useful, most powerful piece of equipment I could find! I thought, and decided to leave all my previous mobility items-spring shoes, climbing shoes, snakes, etc.-in town and live with just the jetpack.

Later, when I entered the Mushroom Zone, I noticed that the Air was depleting unusually fast. So that's what you call depleting air!

Still, it was more important to me that my bag was empty, so I decided to keep using the jetpack.

Now that my bag was empty, I decided to use this high mobility to collect a lot of mushrooms from the mushroom zone to buy a kitten from the kitten store for those who want a kitty but are suffering from too high a price to buy one!

And after collecting more than 46 SM in a death-defying effort, I managed to get a kitty (a Scottish Fold)!

By the way, 1 SM is the price of 1 normal mushroom! 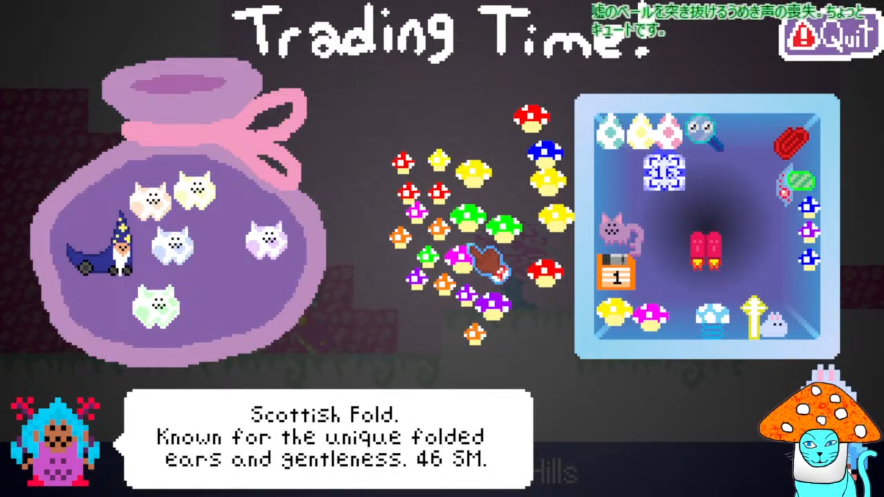 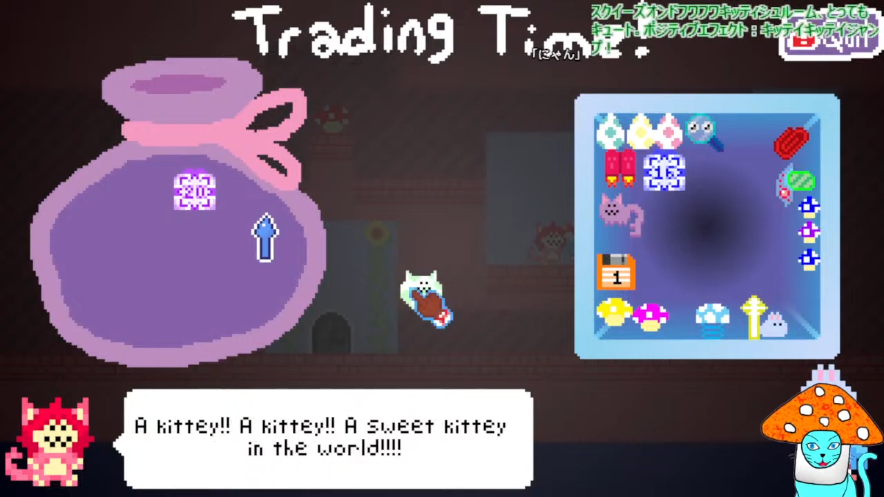 And in return, I got a clock hand, and to top it off, I got to be best friends with the person who wanted this kittey!!!

But I had one thing on my mind here.

I looked up this expensive Scottish Fold that cost 46SM, and after I bought it, I found that it was described as a "kawaii kittey shroom".

Speaking of kitty shrooms, I had seen several other people wanting them, and I had also seen a kitty shroom with the same look for about 10SM at the Daily Rare Mushroom Shop.

Back and forth in time, I was on a journey to find the location of four hidden puzzle pieces in the world.

Puzzle No. 001 Find the beautiful queen buried in a pyramid in the big city.
Puzzle No.002 Find the lonely princess rooted on an island floating on a hill.
Puzzle no.003 Find the skeleton clone cruelly displayed on the edge of a cliff.
Puzzle No.004 Find the wounded girl who lies beside the fool in the ruins. 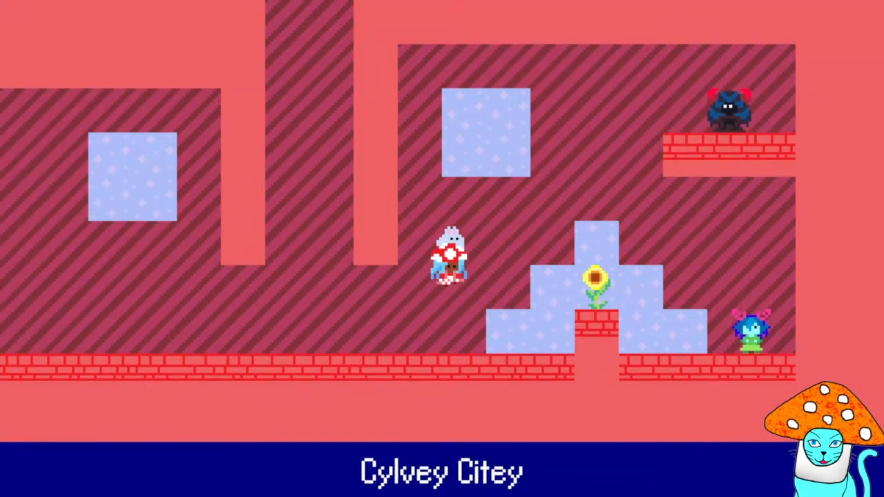 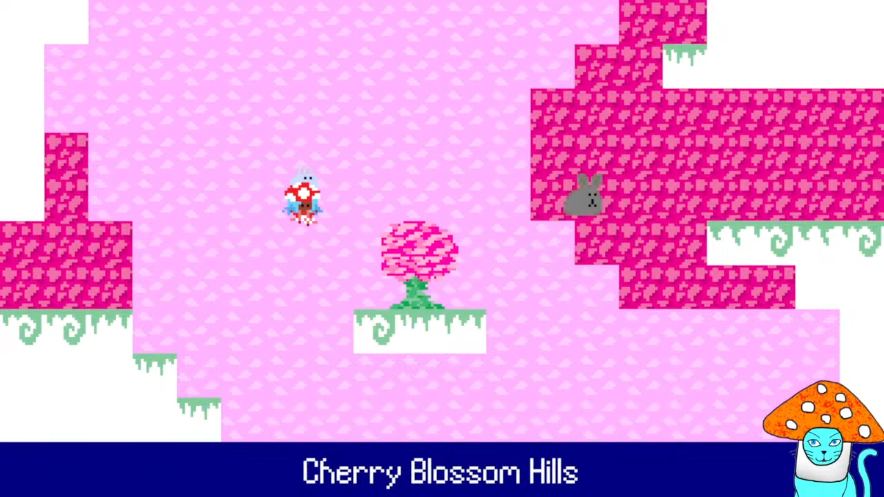 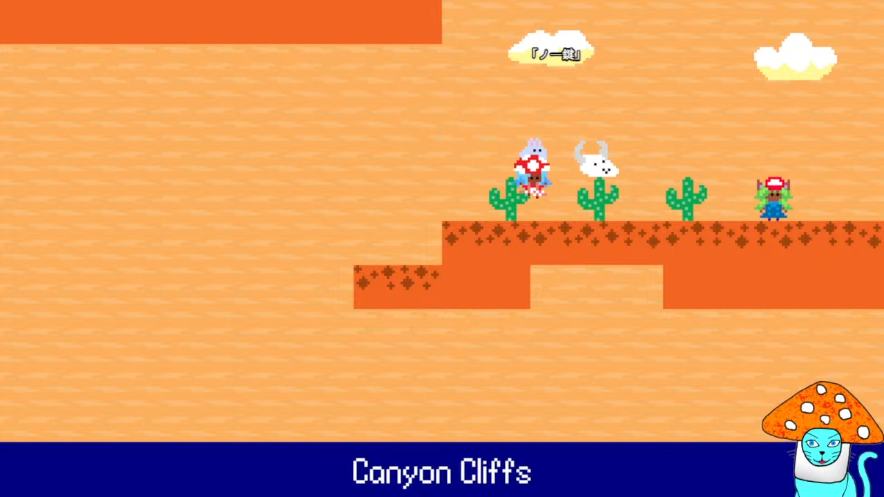 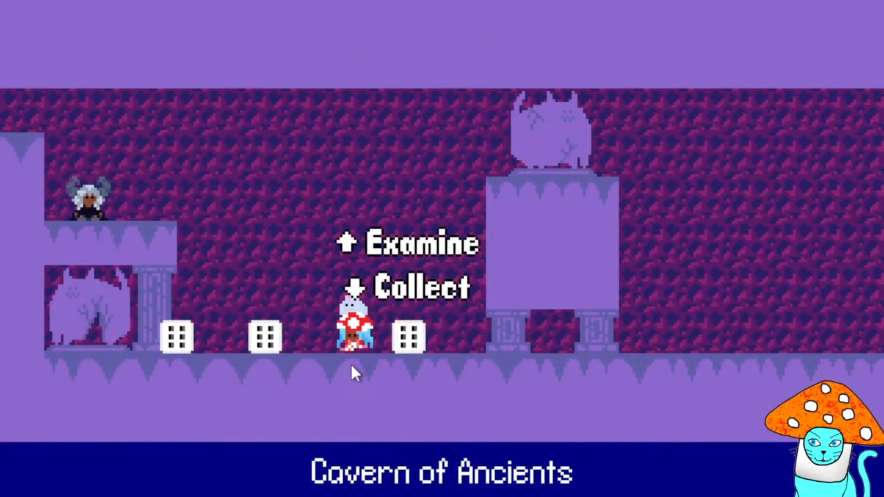 I've made the image smaller because of spoilers, but I was able to find pieces of the puzzle in these places.

As a reward, I got a loupe that could reveal a hidden passageway.

With this loupe in hand, I tried to buy a kitten from the kitten shop, but then I noticed a suspicious passageway to the right of the kitten shop, so I went ahead and found a mushroom zone closed by a lock.

But this was left to explore after buying the kitty from the kitty shop.

I finally saved up a large sum of money, gave it to someone who wanted a kitten, and entered that mushroom zone with a full heart.

Inside were the memories of the cat shop and the person who wanted the kittens.

I read the memories of people who wanted kittens: "I came here because I heard there were kittens here, but no matter how hard I look, I can't find them. People outside are selling kittens, but they are too expensive and I have no way to afford them. I am about to cry. How happy I would be if I could get a kitten. If there was such a person, he would be my best friend". 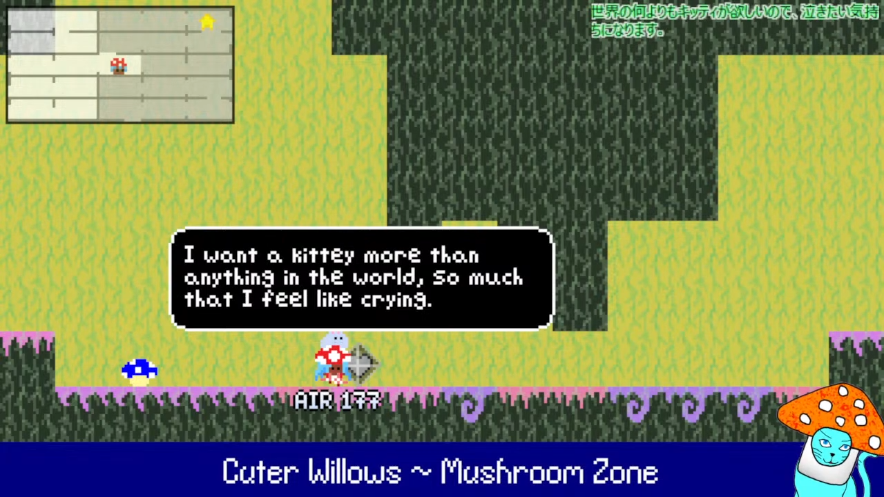 In fact, just before entering this zone, I remembered reading a previous hint about where the springshroom was located.

The information was that the Spring Shroom was located near the junk store that needed it the most.

In fact, I was beginning to get a dim sense that kitty=kitty shrooms were similar to that, and that they were located near the only cat shop in the world that sold them.

And after reading these memories, I went further into the depths of the mushroom zone and realized that my concerns were true the moment I saw the kitty shrooms walking around in good spirits. 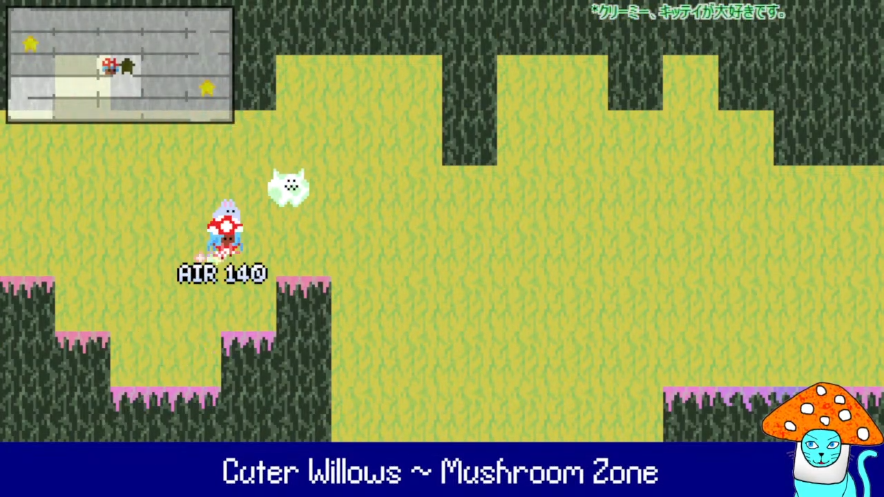 Speaking of which, rare mushrooms have special effects when you have them: the Sparkle Shroom has golden sparkles that appear around your body, and the Spring Shroom increases your jumping ability.

I'm sad that I got ripped off, but I'm glad I could make someone who loves kitten happy!!!!

At a hint shop in the cave area, I bought a hint about the mystery of the four kitten statues and a hint from there about further answers to it. 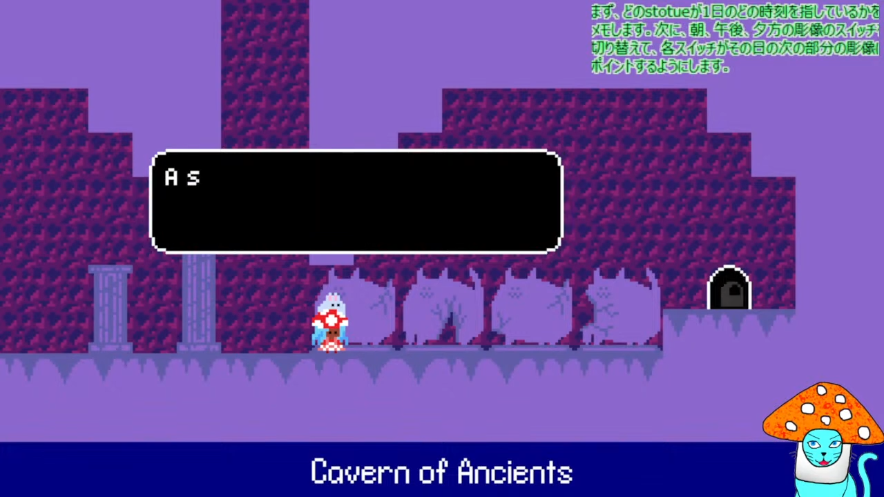 I tried everything, but I couldn't figure it out at all just by reading the clues, so I looked at the answer beyond the advice not to read it.

I got to the middle of the answer and it hit me, so I stopped reading and immediately went to the statue of the four kittens to start solving the riddle, which I managed to do.

Then I entered the Secret Tomb area, and a cutscene with background music (very good!) dedicated to exploring the tombs. A cutscene was played to explore this area with 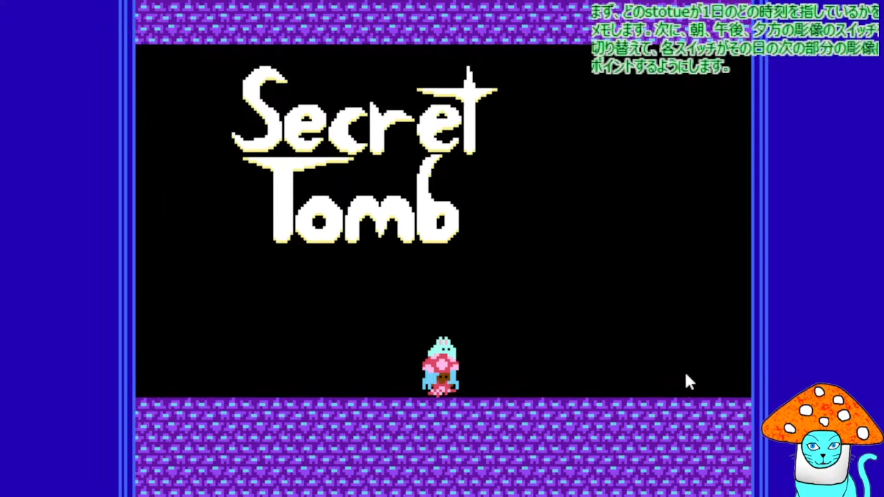 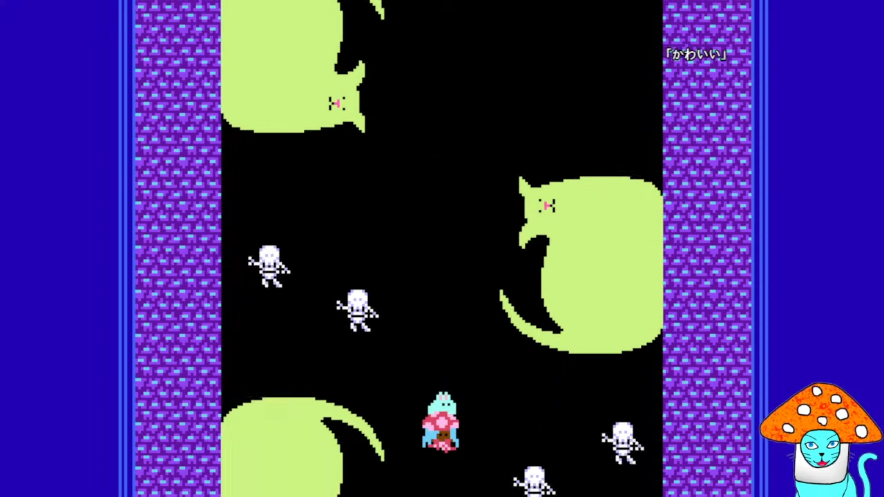 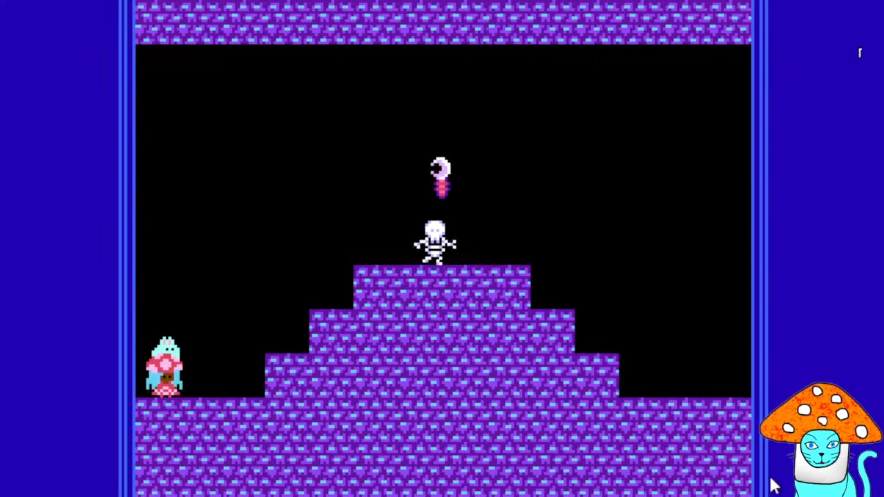 It was so fun to see all the bones and kitties dancing!!!!

It's so awesome woohoo!

And that's the end of my day 4 play diary!

Click here to see the archive of our play