Finally, on the fifth day, the game is clear! This time there are spoilers for the core of the story, so be warned! 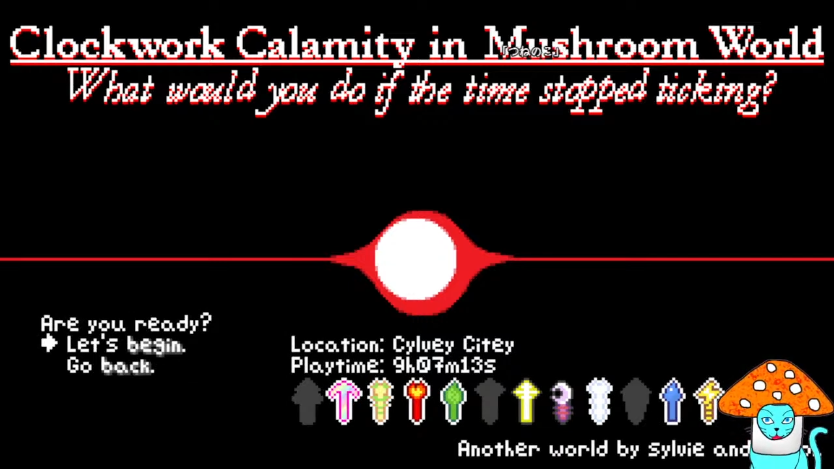 One of them is held by thunderclouds, but I don't know the answer at all because there were only a few lonely hints when I talked to him and looked at the memories of thunderclouds in the hidden mushroom zone, so I decided to start with opening hint messages in all areas today.

The first step is to open the hints in the Cherry Blossom Hill area.

The mysteries still remaining there are the exchange item for the premium food to talk to the rabbit, the person who only says "enter your password" when you talk to him, the exchange requirement for the person with the Eivlys shard, and the one about the thunderclouds.

I bought all the hints from the hint shop and got a hint about the password person and the thundercloud.

The hint was "the thundercloud is looking for something similar to you, and it's in the cliff area," so I took the "rock," which is also a black lumpy thing, just in case, and I got a clock hand with great success! Yay! 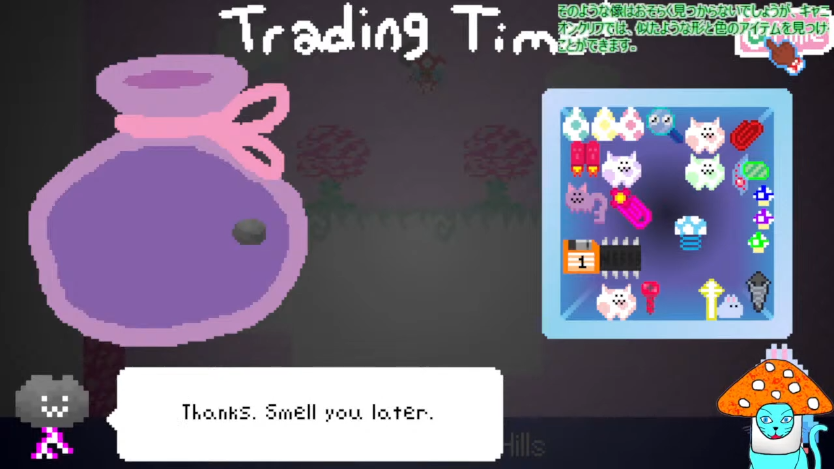 I never thought clouds would feel an affinity for rocks!

The password person gave me a hint that if I kept talking to him over and over, I'd get a secret password-like thing that would confirm my password because I made too many mistakes during the actual account login, and if I brought the corresponding three questions, he'd unlock it for me. 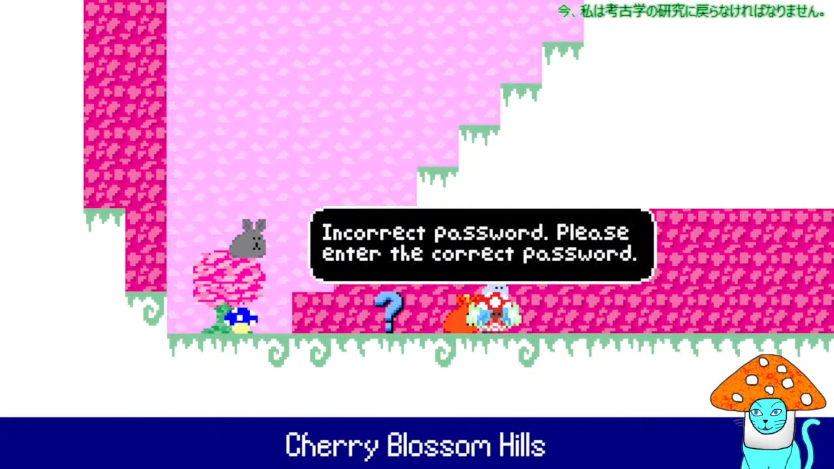 But at this point I was like, "Three items? You mean those Eivlys shards scattered all over the world!" and furthermore, there was a hint that solving this password had nothing to do with clearing the game, so I decided to leave it until the end...

I didn't get a hint of a premium food that would understand the language of the rabbit I didn't understand, so I spoke to the rabbit goods store again and they said, "Something sharp like a carrot, like a sword for example!" He said (I had heard this earlier in the day but had forgotten).

I went to get a sword from the guard and he said he wanted something popular in town, so I took the Silvie (the author's) doll I picked up in the dungeon.

I took the Silvie doll I picked up in the dungeon, and he said he wanted something a little more popular, so I went to the gift shop in town and bought a pudding doll! 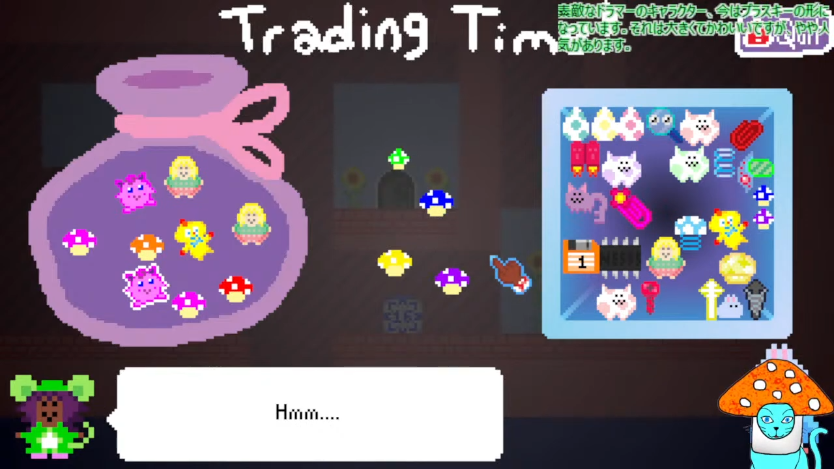 The rabbit has a close relationship with Eivlys. The rabbit itself can use magic, and it is said that it helped Eivlys to create the mushroom zone.

However, it is said that without love, something cold can be created, so Eivlys used magic with love. Good story!

We were also told that if you get all 3 6's on the die at once in front of the gamblers in the cave area, the number of rare mushrooms in the Mushroom Zone will increase, so we put it into practice.

When I got all 6's, the voice of the dice goddess was heard and restored, and from then on, rare mushrooms became easy to find.

By the way, when I got the rabbit premium food, the main character itself took the shape of a rabbit. Super cute! 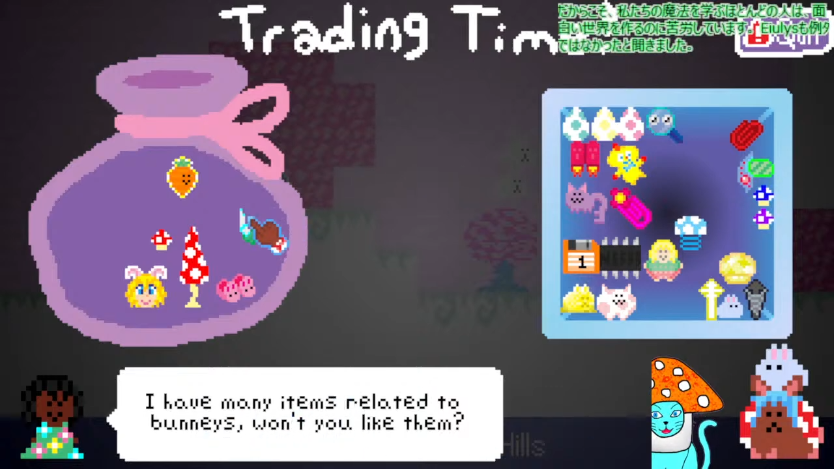 Oh, I forgot to mention that I was given a tip on how to exchange feathers for chickens.

I was told that you could trade a chicken for a feather by giving it two clips other than the red clip, one of which involved someone dealing in red clips, and I had a flash of inspiration and decided to collect Worthless mushrooms to try to buy all the red clips. 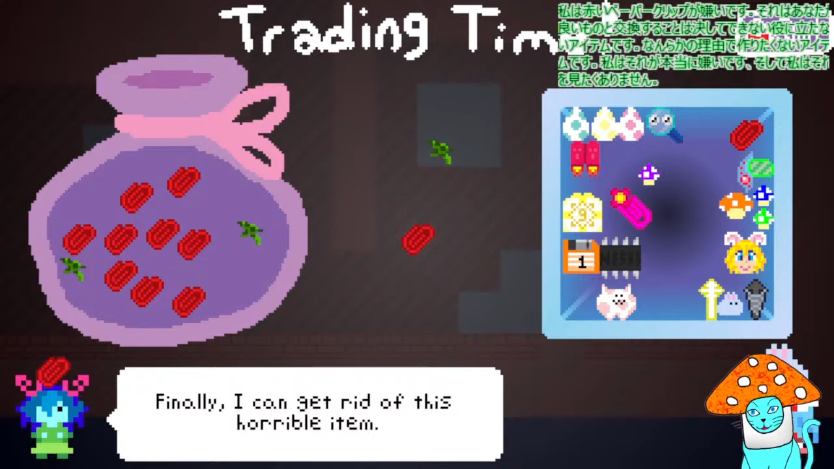 The red clip can be exchanged for one Worthless mushroom.

Worthless mushrooms were hard to find when I looked for them, and I thought I'd pick up a kitty shroom while I was at it and make it say "nyan nyan nyan nyan nyan..." a lot when it jumped.

I got a dorky T-shirt that said "Stupid" on it, but I had no idea at the time that it would become a foreshadowing of what was to come. 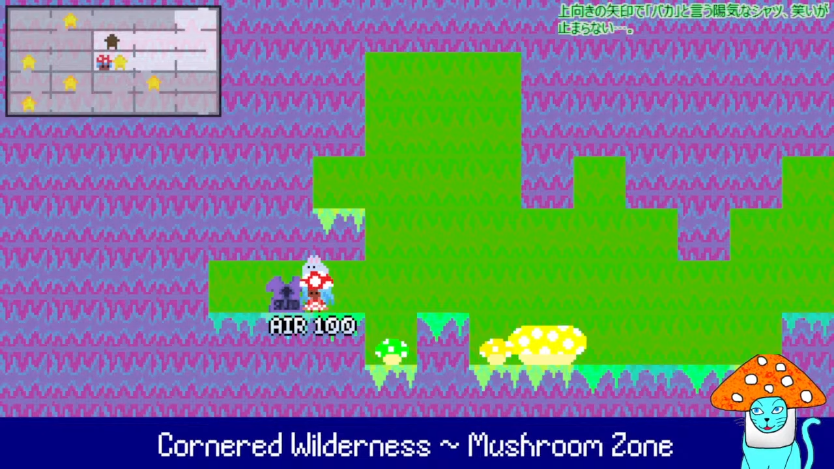 The kitten got a lot of them and enjoyed meowing at them, then let them all go and fluff them up in front of kitten lovers. 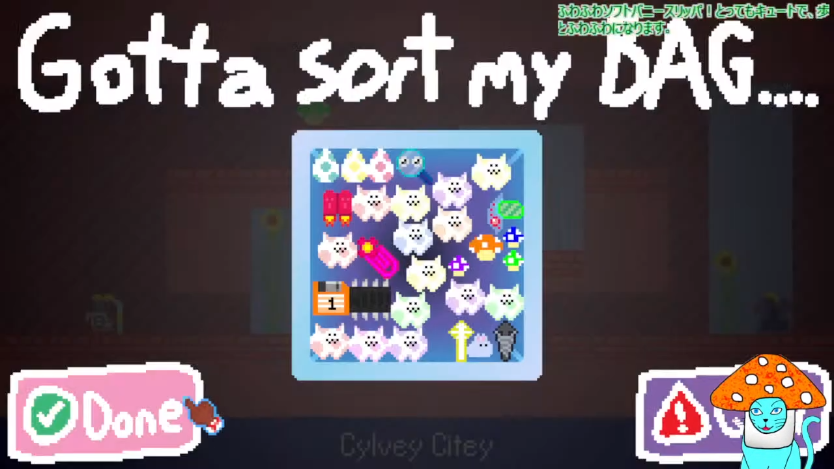 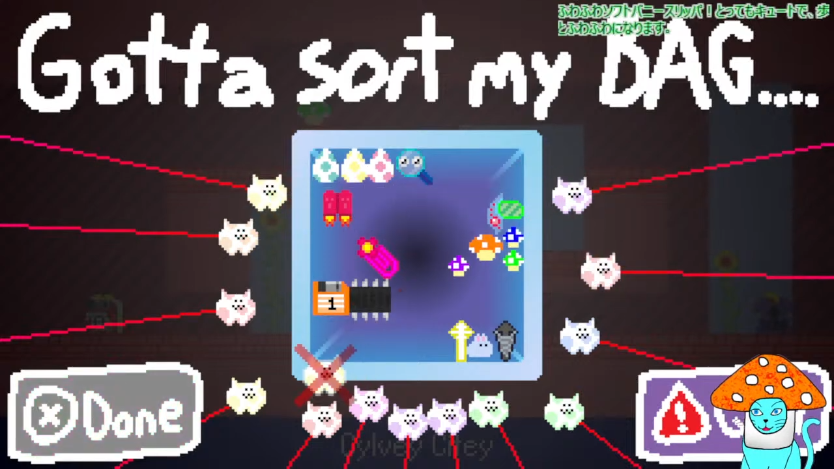 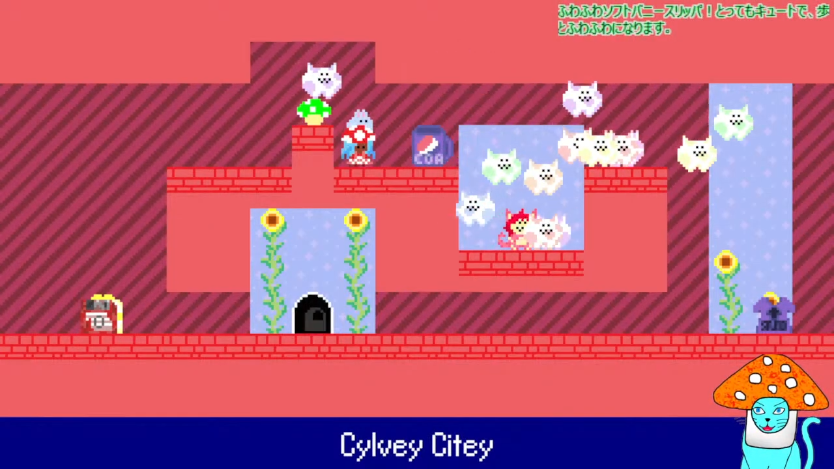 I then finished replacing all the red clips in the "bag" of the person who had all the red clips, but he didn't give me a different clip. I was worried that something was buggy, but I couldn't help myself and went to ask for tips on other areas. 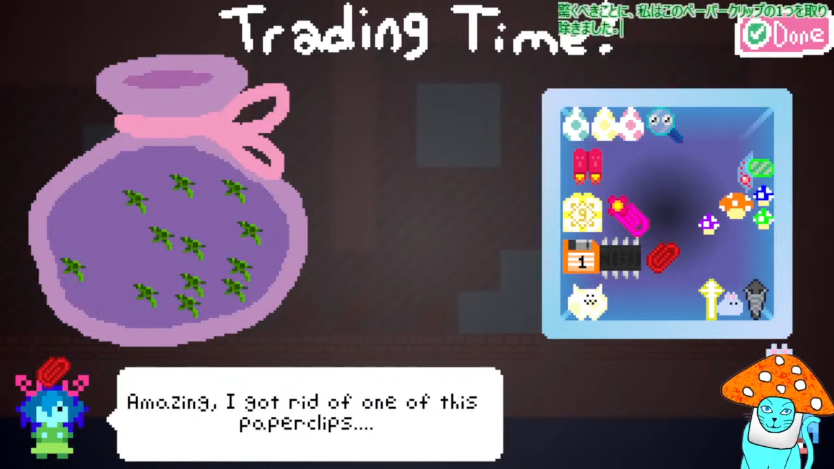 I heard a tip in Silvie Town, where the first area and final objective is the clock tower.

I also heard a hint about a riddle about the prisoners being held in the clock tower. 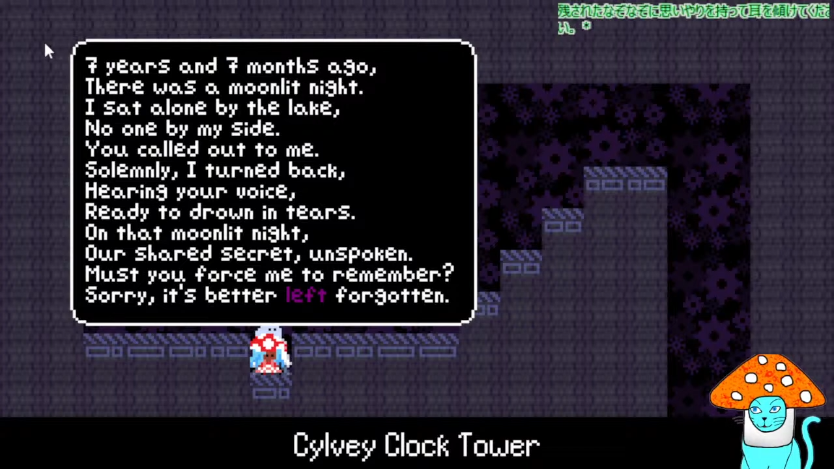 I kept trying to figure out what it meant, but could not come up with an answer. When I asked for a hint, I was told that the text itself had no meaning, but that there was a mystery hidden elsewhere.

Then I went up to the tower and read the text again, only to find that the word "Left" was emphasized, and I realized that it must be a vertical reading, and finally succeeded in solving the mystery.

I explored the mushroom zone to get the 7 Tiny Shrooms, and while I was at it, I collected another Worthless mushroom to see what would happen if I gave it to the person with the red clip.

I gave it to him, and to my surprise, he had the last red clip on his head as well, and I was able to get the last one and finally save the man with the red clip! 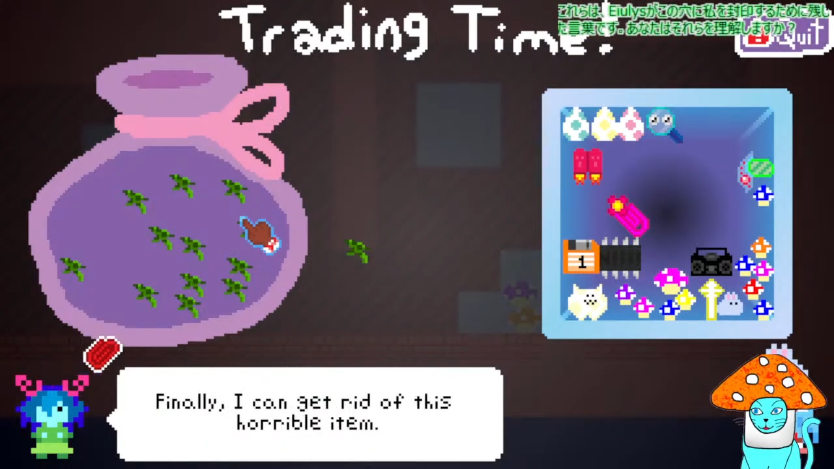 As a reward, I got a clip of flowers, which I traded for chicken feathers, and the best mobility item that could fly indefinitely and not consume Air in the Mushroom Zone!

But that was after I already had all the items I needed in the Mushroom Zone: ！！！！！

Oh my gosh but it feels so good to have better mobility!!!! 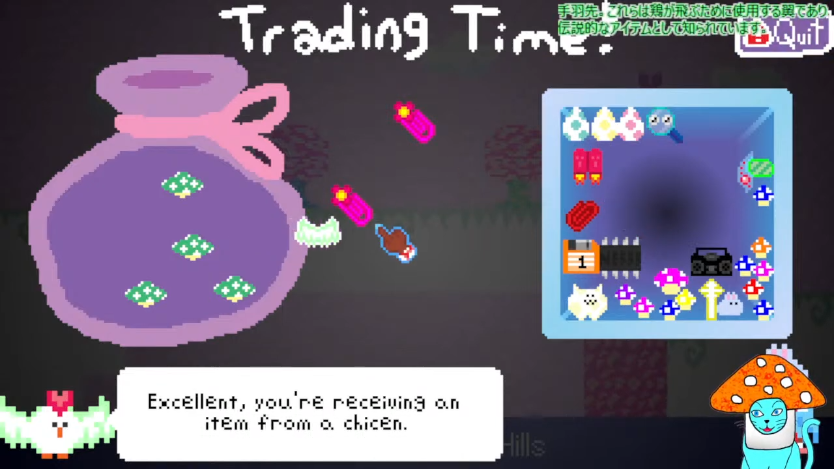 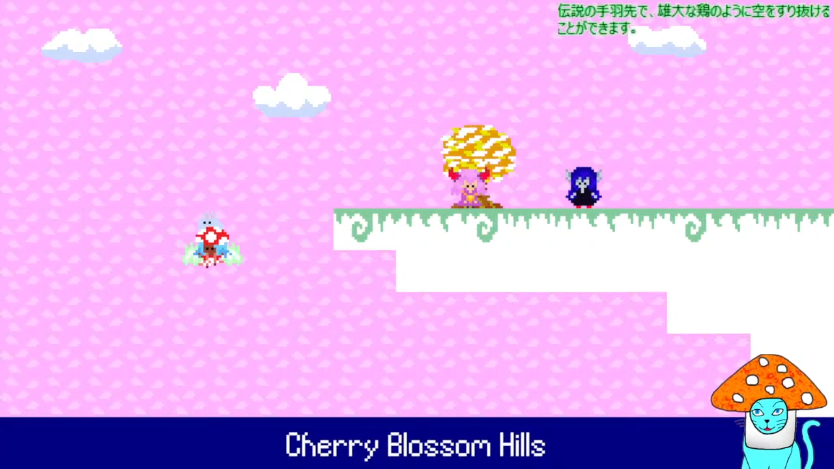 After that, we exchanged the 7 Tiny Shrooms for the "Hand of Lies" and were able to free the prisoner.

You may think that Eivlys is a terrible person for keeping the prisoner in such a tower, but the prisoner's memories are in the Hidden Mushroom Zone, and he was actually only here to solve the final riddle at Eivlys' request, and was free to roam around when no one was looking. 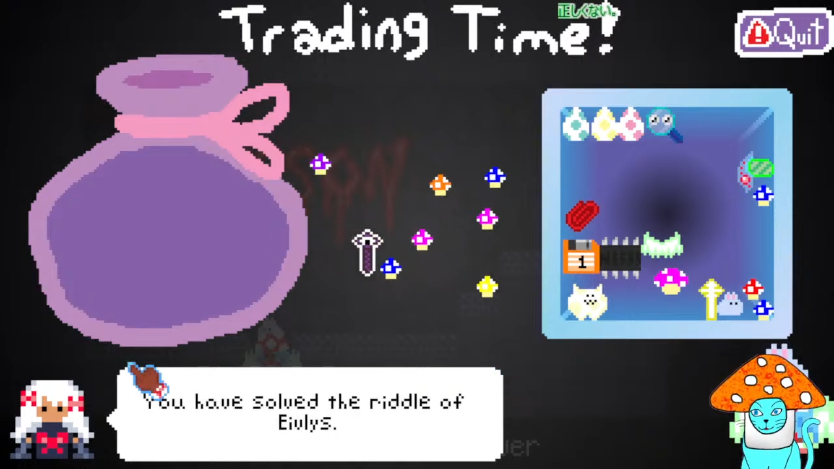 In the last room was the door to the "Hand of light," which he had obtained in the middle of the tower but could never find the keyhole. 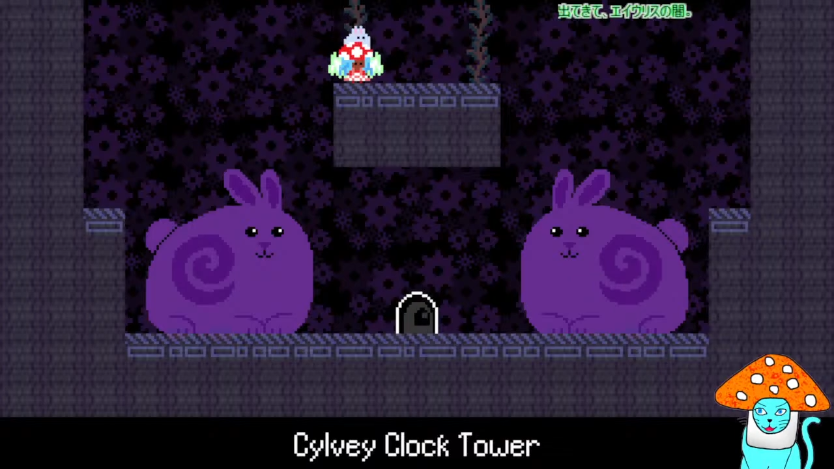 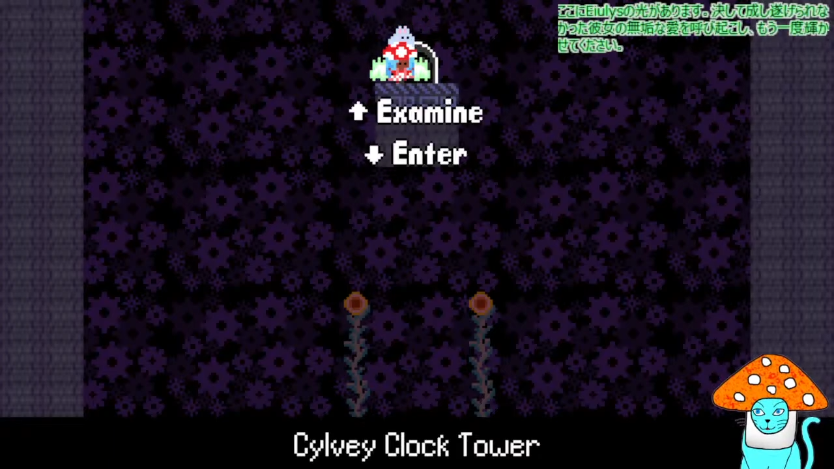 With the message "Here is the light of Eivlys, let it shine once more, evoking the love of innocence that was never achieved", the last door was opened.

When we reached the top, there was a clock with all the hands we had collected so far, and beside it was someone's grave.

When he placed his hand on the grave, the clock started moving and the clock tower was unlocked on both sides. 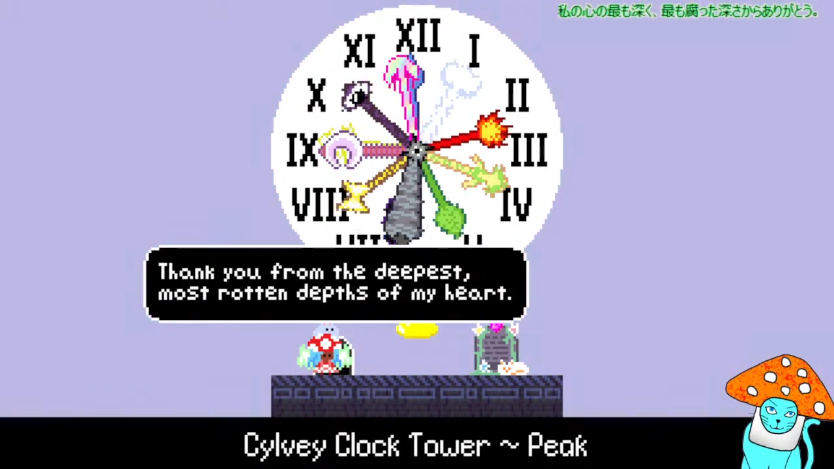 When I tried to return to the entrance, the inside surged violently and I could not go back anymore.

I felt that the world I had been in was gone and it was time to return to the real world.

Then I made up my mind and jumped out of the clock tower, and the staff roll and cast introductions began to play! 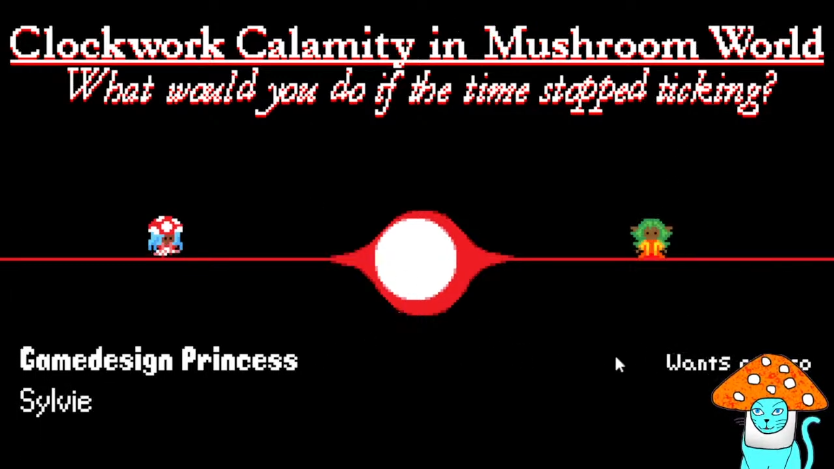 There was a mysterious entity called Princess spoken of by people throughout the game, and it was the author, Sylvie! 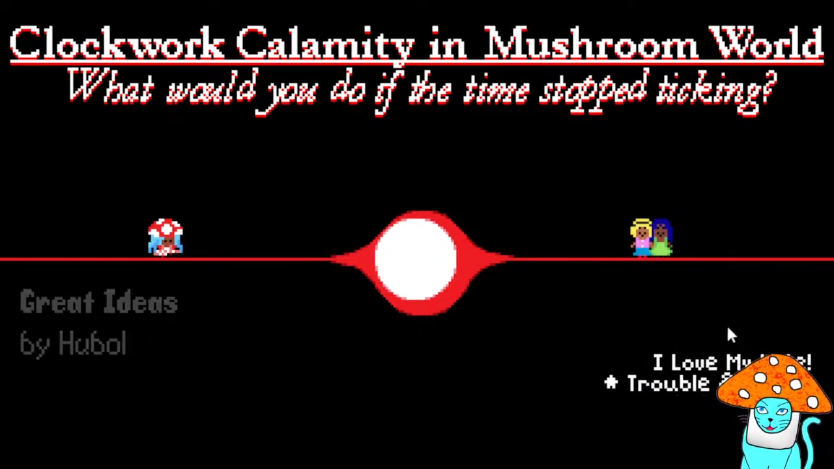 I do enjoy that the cast introductions have a word of commentary! Reminded me of Cave Story. 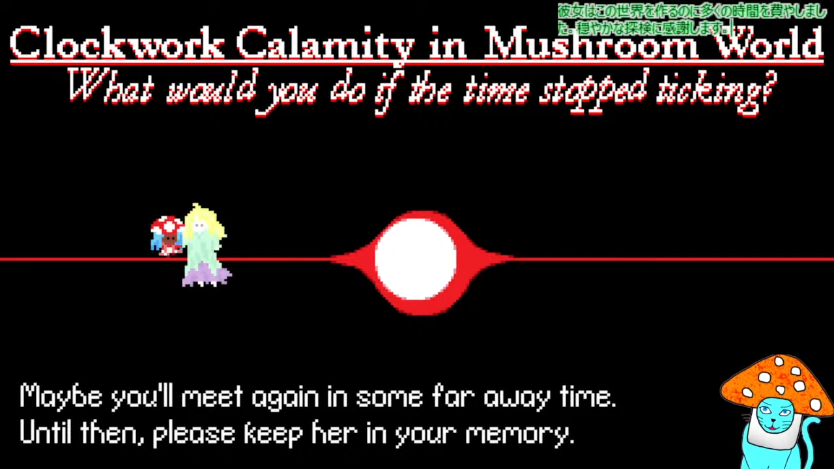 Finally, Eivlys or Silvie appeared, danced and bowed with our hero, and the game was over!

This ending performance was great !!!!

I was able to complete the game with a great feeling of satisfaction.

After completing the game, I exchanged three shards from someone with Eivlys's shard and gave them to a suspicious person and solved the password.

The Eivlys shard was a part of Eivlys's body, and I was very reluctant to give it to him, but in return I received a key to another world. 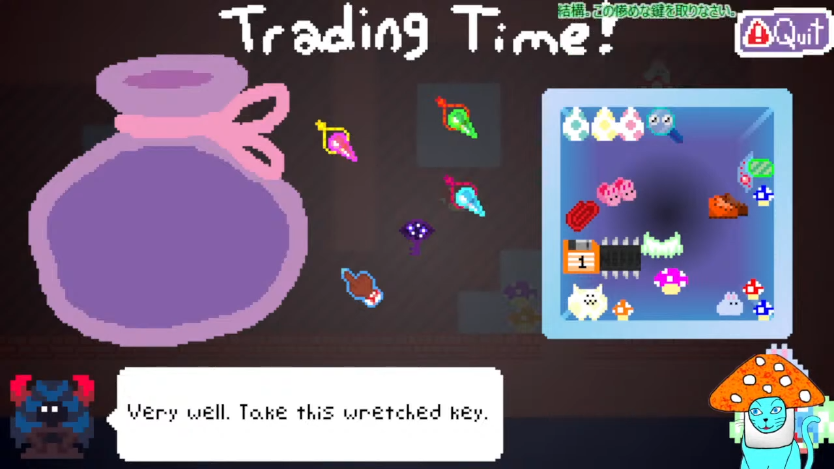 Then the suspicious person said he had no more use for this world and that's pretty scary!

I finally realized that the password had nothing to do with the shard and collected the three items presented. 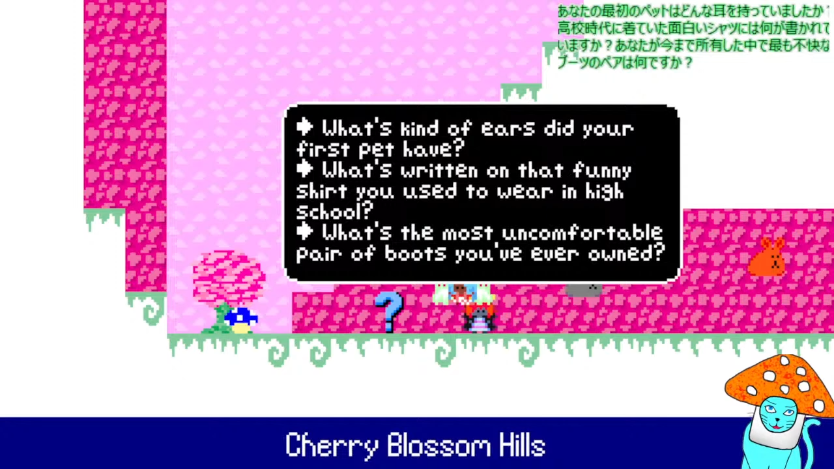 I was very lucky, because I thought that if I had not picked it up in the mushroom area, I would never have noticed it. 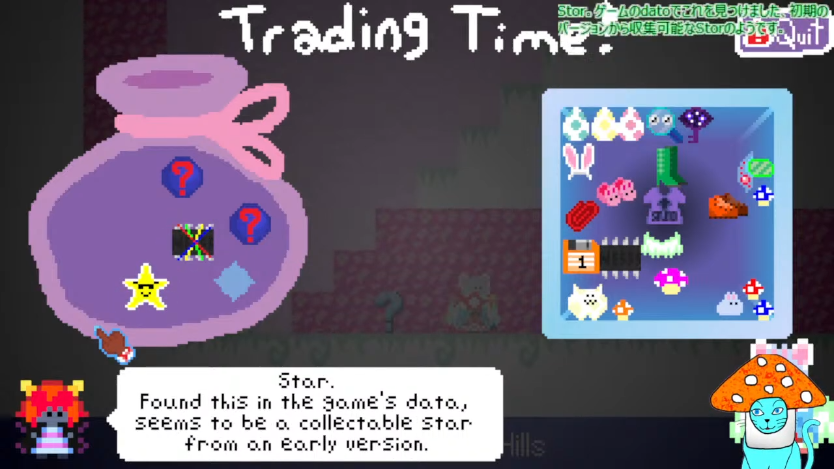 Once I cracked the password, I was able to see the items that existed only during development and that had been forfeited.

There were item templates, instant death traps that existed in older versions, and now ineffective collectible stars, but there was one item that was sealed because it was too powerful: "It shows all fallen items on the minimap.

When I used it, it was very useful, so if you are doing a second round or something, you may want to solve the password early for this.

And the game was completely clear!

But on the menu screen at the start of the game, there was an option to go to another world, and a challenging second round was provided, where the difficulty level of the mushroom zone and the placement of rare mushrooms changed based on the world name entered. 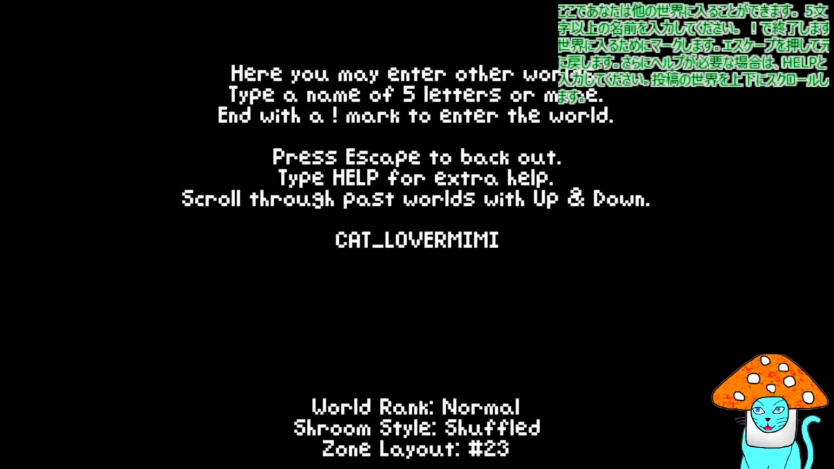 I'd love to give it a shot sometime!

But this adventure ends here!

Thoughts on clearing the game

The five days I spent playing the game were really fun and fulfilling.

I don't mean to be rude, but I started the game thinking that it was just a cute game, with the cute factor being the main focus and the other elements not being created with that much attention to detail. I was surprised to find that the game was incredibly well thought out, from the bartering system to the difficulty of the action and the large number of items used to alleviate the difficulty.

Clockwork Calamity in Mushroom World is truly an amazing game: ！！！！！

Thanks for a fun gaming experience!!! 彡・ω・彡 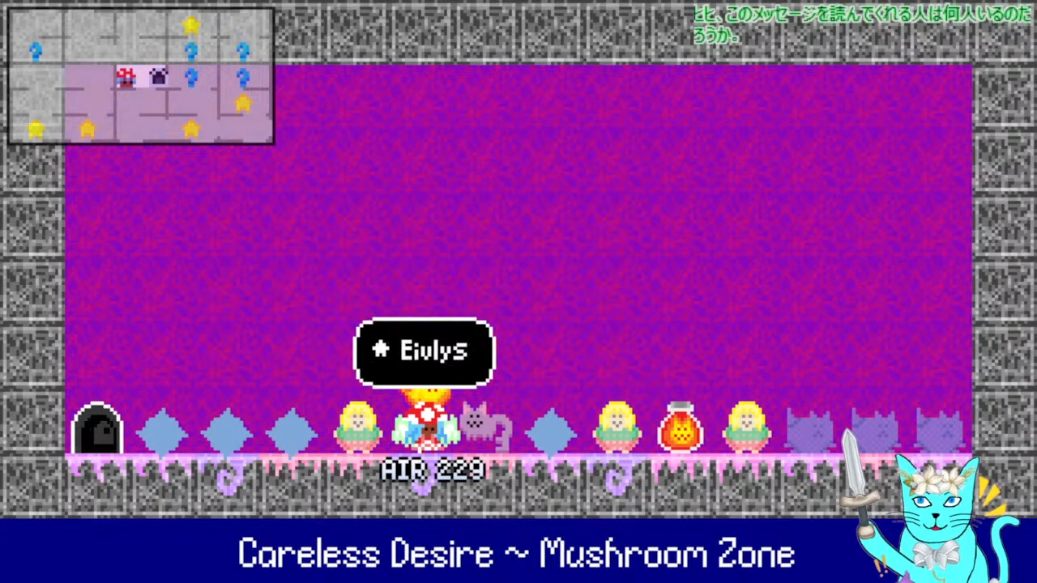 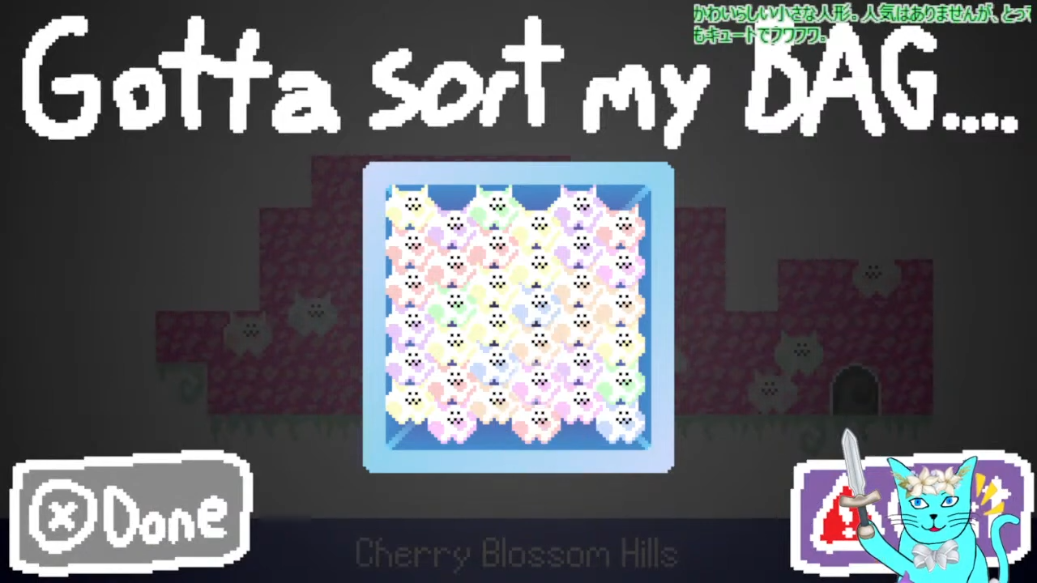